The Value of U.S. Energy Dominance

The Trump Administration’s focus on deregulation and innovation has taken energy dominance to new levels. Innovations in this sector benefit Americans by boosting productivity and reducing energy prices for consumers, and has just in the last year led America to become a net exporter of petroleum (crude oil and refined) products for the first time since 1949.

Additionally, in 2017 the United States became a net exporter of natural gas on an annual basis for the first time since 1957. Texas and New Mexico, home to the historically productive Permian Basin, first discovered in 1920, helped lead a revolution in shale oil and natural gas production resulting in substantial economic and environmental benefits for the United States. In 2019, driven by shale, Texas was the fourth largest crude oil producer in the world. Action taken by the Trump Administration has supported both stronger-than-expected coal and LNG exports and renewable energy capacity.

In a recent report, the Council of Economic Advisers (CEA) highlighted the benefits of oil and gas innovation. From 2007 to 2019, innovation in shale production brought an eight-fold increase in extraction productivity for natural gas and a nineteen-fold increase for oil. CEA estimates that shale-driven improvements in energy productivity reduced the domestic price of natural gas by 63 percent and led to a 45 percent decrease in the wholesale price of electricity.

Shale-driven improvements also reduced the global price of oil by 10 percent. Because of these price decreases, CEA estimates that the shale revolution saves U.S. consumers $203 billion annually, or an average of $2,500 for a family of four. These savings are experienced by all consumers, but they represent 6.8 percent of income for the poorest fifth of households compared to 1.3 percent for the richest fifth of households (figure 1). 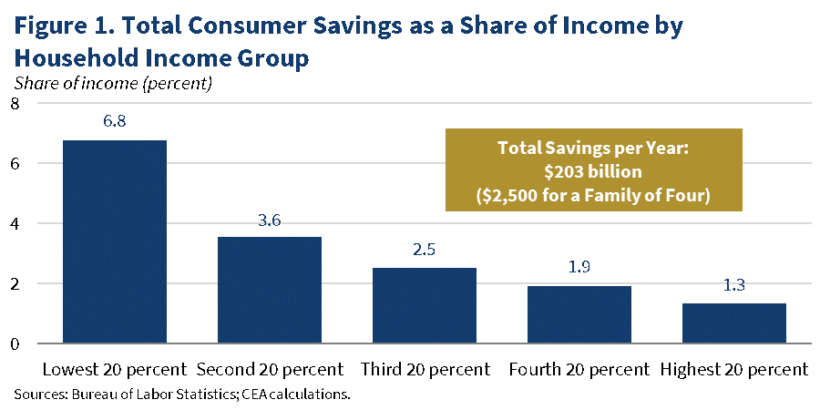 The report also documented how innovation can lead to greater environmental benefits than those sought through regulations. From 2005 to 2017, the shale revolution lowered energy-related greenhouse gas emissions (GHG) by 527 million metric tons per year, contributing to a greater decline in GHG emissions relative to the size of the economy in the United States (-29 percent) than in the European Union (-21 percent) over that period.

This decline is larger than what the EPA projected its 2012 Light-Duty Vehicle Greenhouse Gas Emissions and Corporate Average Fuel Economy (CAFE) Standards would achieve in 2025 (380 million metric tons) and more than double what the EPA in 2015 projected its now-rescinded Clean Power Plan would achieve by 2025 (240 million metric tons). These environmental benefits were realized at the same time the United States became a net exporter of natural gas (figure 2). The large increase in natural gas exports came despite natural gas prices 50 percent below where they were when President Trump was elected.

In addition, this Administration has accelerated development of alternative uses of coal such as coal-to-products and coal-based hydrogen production that offer new markets for coal. President Trump remains a strong supporter of carbon capture and storage (CCS) technologies, critical to fossil energy and many industrial processes, through the 45Q tax credits in the Bipartisan Budget Act of 2018 and the recently proposed guidance from the IRS.

Renewable energy capacity continues to develop, demonstrating the importance of policies and actions such as the One Federal Decision Executive Order and reforms to the National Environmental Policy Act regulations that apply to all Federal agencies. Through March 2020, renewable energy capacity was 10 percent higher than the forecasted capacity and over 30 percent higher than renewable capacity in January 2017. With energy infrastructure being constructed and updated, renewable energy production becomes cost competitive with other sources of energy, ensuring its future viability. 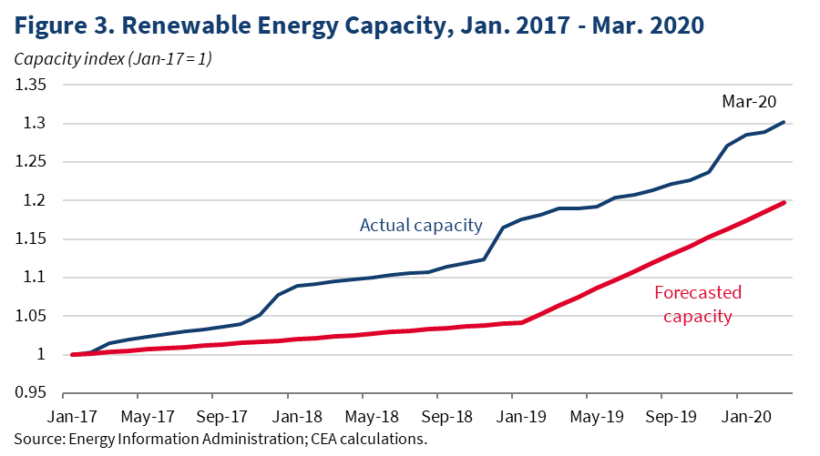 All of these advancements are occurring at the same time as emissions are falling. Criteria pollutant concentrations are down since 2017, with lead down 28 percent, sulfur dioxide down 10 percent and particulate matter down 12 percent. As this Administration has demonstrated, innovation breeds real positive results for the American consumer, business, and the environment. In addition, the electricity sector has reduced per unit carbon dioxide emissions by 15 percent relative to 2017 EIA expectations when President Trump took office.