Today, the Bureau of Economic Analysis (BEA) released its advance estimate of U.S. GDP for the second quarter of 2020 reflecting the months of April, May, and June. Real GDP contracted at an unprecedented annualized rate of -32.9 percent—the largest quarterly decline since the series began in 1947—slightly better than what market and official estimates had expected.  Despite this massive contraction, the resiliency of the U.S. economy and the swift fiscal response of the Federal Government can aid in a strong recovery.

The U.S. economy entered this contraction on a healthier and more resilient footing than it did both prior to the Financial Crisis of 2008-09 and relative to other advanced economies. Thanks, in part, to the longest expansion in U.S. history, American households had a smaller overall debt burden prior to this pandemic than prior to the Financial Crisis. Household liabilities as a percent of personal disposable income were 136 percent leading into the Financial Crisis but were below 100 percent prior to this pandemic. Additionally, thanks in part to growth-focused policy, the United States had the highest growth rate among the G7 countries prior to the pandemic, with growth roughly double the non-U.S. G7 average from when President Trump took office through to the end of 2019.

The second quarter decline in GDP was widespread, touching nearly every facet of the economy (figure 1). Consumer spending, which accounts for roughly 70 percent of the U.S. economy, contributed to most of the decline, accounting for 25.05 percentage points of the -32.9 percent decline. The report also showed sharp contractions in business fixed investment, residential investment, inventory investment, and state & local government spending which contributed to the decline. A massive but uneven decline in consumer spending (-34.6 percent at an annualized rate) revealed how quarantines have driven spending patterns. Individuals increased consumption of recreational goods & vehicles and housing & utilities, but lessened consumption of gasoline & other energy goods, health care, transportation services, recreational services, and food services & accommodation. The decline in business fixed investment was also widely spread, though it was particularly sharp in transportation equipment investment and mining structures investment, the latter reflecting subdued oil and gas production activity responding to extraordinarily low prices. 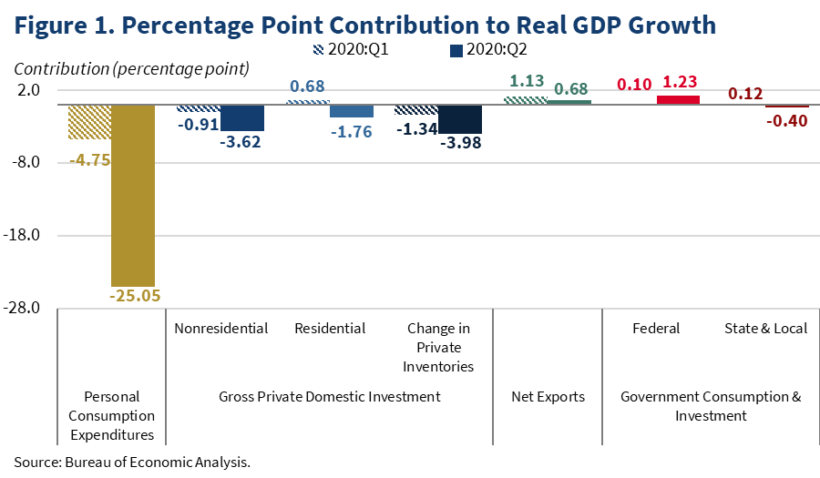 This pandemic caused a sharp drop in real personal income as many workers faced lower wages, fewer hours or job severance. However, the scale and speed of the initial Federal fiscal response, including expanding unemployment insurance, economic recovery rebates and emergency loans enacted as a part of the CARES Act, caused post-transfer real disposable personal income to increase. In early estimates from the University of Pennsylvania, the CARES Act reduced the GDP contraction in the second quarter by 7 percentage points.

Recent measures indicate that some economic activity has already resumed. Utilizing monthly retail sales and industrial production data, both important gauges of growth, it is clear that the declines in March and April—the most acute period of nationwide lockdowns—were the motive force driving this historic contraction (figure 2). As the country reopened, both indicators experienced a rebound in May and June. The forecast is for strong real GDP growth in the third quarter. The current Blue Chip consensus forecast of 17.7 percent annualized growth in the third quarter would be the largest recorded quarterly growth rate and a 36 percent recovery of the second quarter contraction. 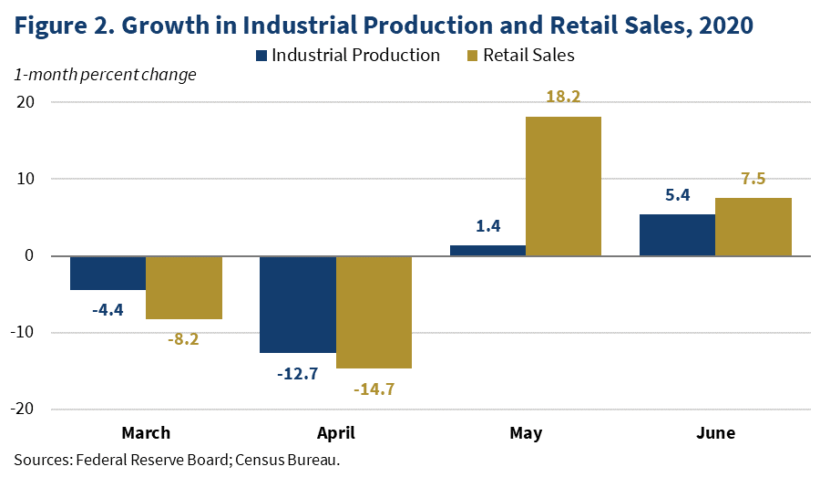 The pace of the recovery so far has exceeded expectations, providing a source of optimism as we look ahead. In fact, the majority of major economic data releases over the past month—reflecting May and June data—have surpassed market outlooks. Most notably, the record-breaking number of jobs added in both May and June beat market expectations by a combined 11.7 million. Furthermore, high-frequency data indicate that 80 percent of America’s small businesses are now open, up from a low in April of just 52 percent. Consumer credit & debit card spending has recovered roughly 80 percent from the pandemic low, with spending in low-income zip codes rebounding the furthest, now just 2 percent below pre-pandemic spending levels.

The magnitude of this contraction reflects the gravity of the economic sacrifice Americans made to slow the spread of COVID-19 and prevent greater tragic loss of life and health. The country mitigated pressures on hospital capacity and allowed medical professionals the time to learn how to more effectively treat this disease. The Trump Administration will continue to support America as we build a bridge to the other side of this crisis.