The Bureau of Labor Statistics (BLS) released its monthly Employment Situation Report, showcasing strong wage growth and steady employment growth. Total nonfarm payroll employment in August increased by 130,000 jobs. Including revisions for the months of June and July, the average pace of job growth has been a robust 173,000 jobs per month over the past year and 158,000 jobs per month so far in 2019. The CBO projected only 14,000 new jobs per month at this point in the cycle in its final pre-2016 election forecast, prior to enactment of the Administration’s pro-growth policies, so this month’s job growth is nearly ten times higher than the job growth CBO had anticipated for this quarter. In total, the economy has added over 6.3 million jobs since the President was elected, nearly 4.5 million more jobs than the CBO predicted would be created between the end of 2016 and the end of 2019:Q3 (figure 1).

The August jobs report also revealed that the labor market remains strong. Job gains have surpassed 100,000 jobs in 30 of the 33 months since the President was elected. Considering the unprecedented length of the expansion and the low unemployment rate, continued job growth at this rate is outstanding. In August 2019, just over 6 million people were unemployed, compared with more than 14 million in July 2009 at the beginning of the economic expansion. 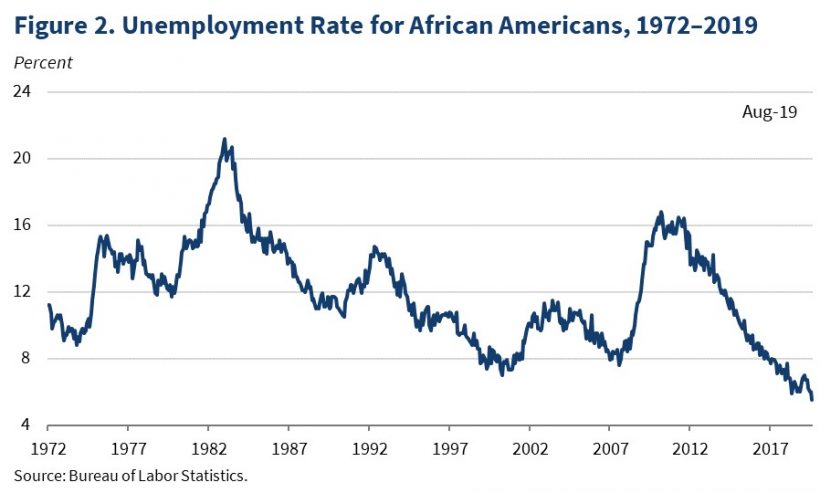 The Trump Administration’s pro-growth policies continue to move workers off the sidelines and develop an even more prosperous economy. Despite the continued low unemployment rates over the past year, there may still be potential workers who haven’t entered the labor market yet, a situation economists refer to as “labor market slack.” Because labor market slack still exists, employment can continue to rise and the economy can continue to grow as workers reenter the labor force. In August, 74.3 percent of workers entering employment came from out of the labor force rather than from unemployment.