Today, the Bureau of Labor Statistics (BLS) released its monthly Employment Situation Report, which shows robust employment growth in September. Job gains are particularly noteworthy considering that the United States is in the midst of the longest economic recovery in its history. The Trump Administration’s pro-growth agenda provides job creators with the framework they need to expand their businesses and offer more opportunities for workers. Since the President’s election, the economy has added over 6.4 million jobs—more than the population of Maryland. Steady job growth in combination with sustained year-over-year wage increases are not only positive signs for the economy: They also improve workers’ quality of life and incentivize previously left-behind Americans to join the labor force. 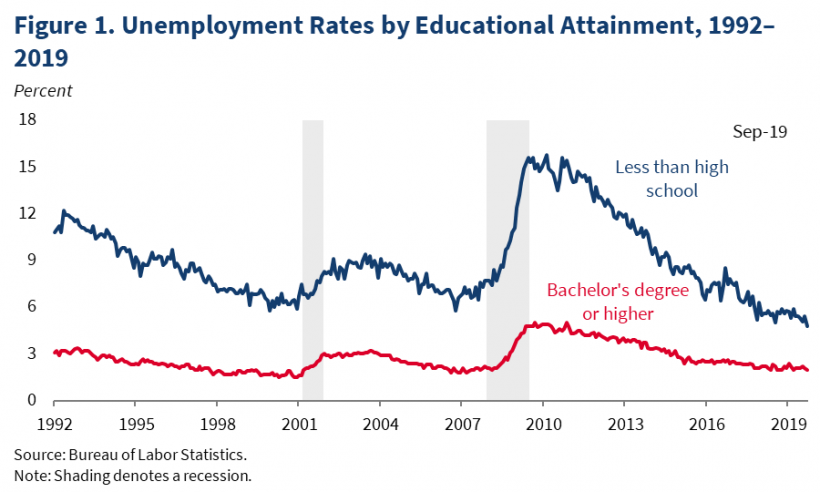 The U-6 unemployment rate, which is a broader measure of underutilization in the labor market and includes those looking for work, marginally attached to the labor force, and working part-time but would like to work full time, fell to 6.9 percent, its lowest point since 2000.

The labor force participation rate—which includes people who are working and those looking for work—stayed constant in September at 63.2 percent and is 0.5 percentage point above the rate when the President was elected in November 2016. The labor force participation rate for prime-age adults (ages 25-54), which largely avoids the demographic effects of the aging population, remained at 82.6 percent—1.2 percentage points above its rate in November 2016. The employment-population ratio increased by 0.1 percentage point to 61.0 percent, a level last reached in December 2008.

BLS’s separate establishment survey shows total nonfarm payroll employment increased by 136,000 jobs last month. Including an upward revision of 45,000 total jobs for the months of July and August, the average pace of job growth has been an impressive 179,000 jobs per month over the past year, and job gains have surpassed 100,000 in 31 of the 34 months since President Trump was elected. Considering the unprecedented length of the expansion and the low unemployment rate, continued job growth at this point demonstrates that today’s labor market is historically strong.

In the third quarter of 2019, 73.7 percent of workers entering employment came from out of the labor force rather than from unemployment, the highest share since the series began in 1990 (figure 2). In an encouraging sign that people previously on the sidelines will continue entering the workforce, more than 300 companies have signed the Pledge to America’s Workers. These companies pledged to create upwards of 14 million new job and training opportunities through education and reskilling initiatives for current and future employees over the next 5 years. 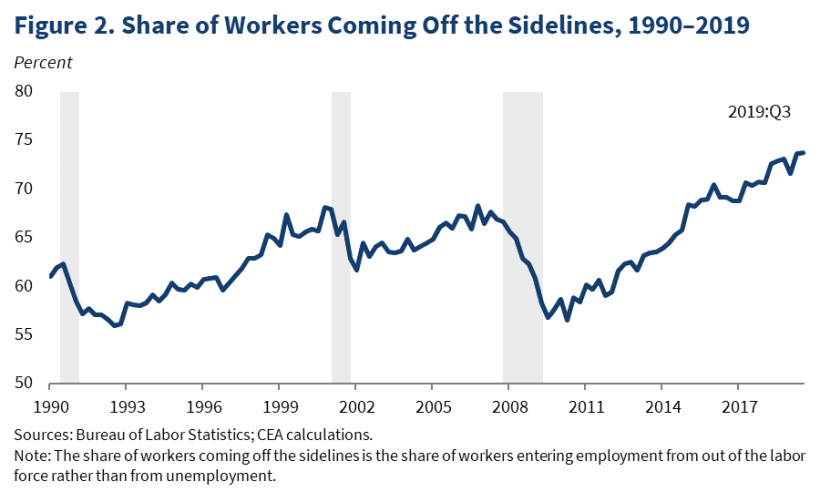 As further evidence of the labor market’s strength, data released this week from the Department of Labor show initial Unemployment Insurance claims have remained at or below 300,000 for 239 consecutive weeks. That is the longest such streak since at least 1967, despite the labor force more than doubling in size since then. Additionally, for the 17th straight month, the number of unemployed people has been lower than the number of open jobs. BLS’s Job Openings and Labor Turnover Survey shows 7.2 million open jobs as of the last day of July (the latest data available), which is over 1.1 million more than the number of people unemployed in July.

With a 50-year low for the unemployment rate and consistent job gains, the September employment data make it clear that the American labor market remains historically strong.