Men and women are not represented equally in the global labor force. Despite representing just over half of the adult population worldwide, women are underrepresented in the workforce—women are working at a lower rate than men in nearly every country.

There are a range of reasons that women may opt against, or be prevented from, pursuing formal employment opportunities, including taking care of children or family members and other productive activities that are outside of the formal labor market, discriminatory laws and practices, and social and cultural norms that limit female employment opportunities. Research has found that increased gender parity has several potential positive outcomes. For example, the World Bank has suggested that improved gender parity increases political stability and reduces the likelihood of violent conflict.

Increasing female labor force participation rates creates an opportunity for countries to increase the size of their workforce and achieve additional economic growth. Below, we highlight this connection between female labor force participation rates and a country’s economic advancement—a national security priority for the Trump Administration and a key driver of the White House-led Women’s Global Development and Prosperity (W-GDP) Initiative.

One way to explore the importance of women to economic growth is to consider the share of adult women who are participating in the labor market. The labor force participation rate, which reflects the share of adults who are either working or looking for work, is a fundamental component of a country’s total economic output. For example, if workers in two countries are equally productive but the countries have different fractions of their populations working, then the country in which a larger share of people are working will produce more output per person. Hence, to the extent that countries increase the engagement of women in their workforces, this has the potential to increase economic output. 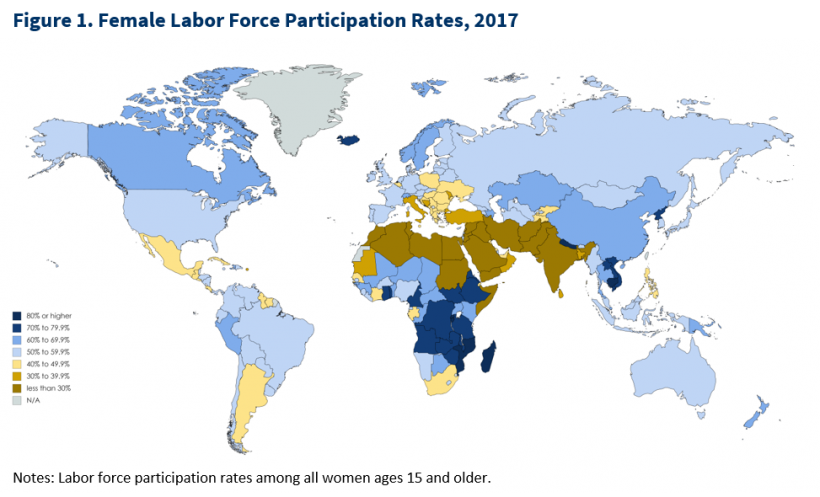 This clear U-shape relationship can be seen even more clearly by plotting the relationship between female labor force participation and GDP per capita in Figure 2. This pattern reflects a bidirectional relationship between women’s work decisions and economic output. The share of women who are working increases GDP per capita, but at the same time, women change their work decisions based on their financial circumstances and the financial viability of forgoing the additional family income that working would generate.

Female labor-force participation rates are among the highest in low-income countries where women are engaged in subsistence activities. But as GDP rises, some women who otherwise would have worked out of necessity will choose not to work and instead spend their time on activities outside of the labor market. For example, some women will choose to engage in home production activities rather than pursuing formal work. Others are attending school, or staying in school longer, to develop additional human capital that will increase their productivity in years where they are working. (Schooling, however, cannot fully explain the relationship seen in Figure 2, as Claudia Goldin has found a similar U-shape when looking only at women ages 25 to 59.)

Furthermore, economic development among these low-GDP countries often comes from a shift away from agricultural employment and into industrialized employment. This shifts the number and nature of jobs that are available to women. Labor force participation can also decline because of the associated stigma in some societies against families where women are engaging in these industrialized blue-collar jobs. Hence, the downward relationship between GDP and female labor force participation rates at the lower end of the distribution is not an indication that lower female labor force participation rates increase GDP, but instead is indicative of women changing their work decisions as GDP rises.

Meanwhile, this downward trend reverses among middle- and higher-income countries where female labor force participation rises with GDP. As women’s education increases and fertility rates decrease, employment in white-collar positions also increases, absent any social barriers. Additionally, holding productivity per worker constant, an increase in the share of adults who are working through a rise in the female labor force participation rate will directly increase GDP per capita. 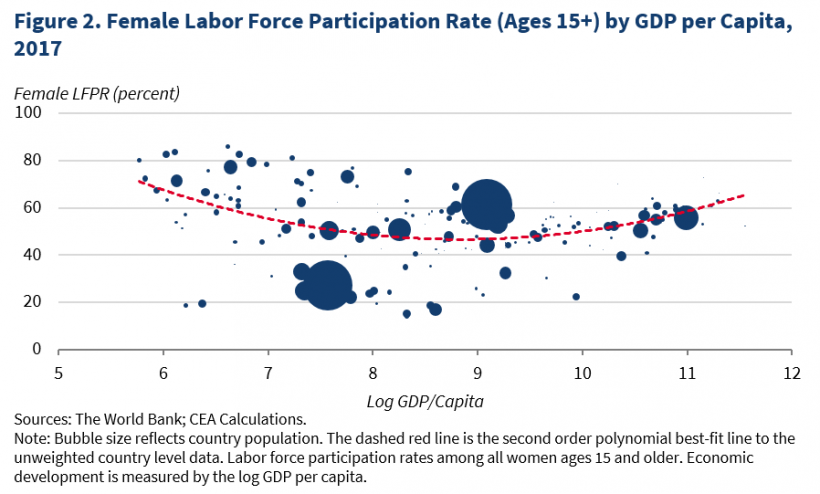 The relationship between female labor force participation rates and GDP can also be viewed from another lens: We can consider women’s labor force participation rates relative to that among men, rather than considering the absolute rate at which women are working (Figures 3 and 4). This approach reflects the relationship between the gender gap and GDP, rather than just the share of women who are working overall. Nevertheless, the overall pattern remains the same, with relative employment rates for women falling with GDP among lower-income countries and then rising with GDP as income increases further. 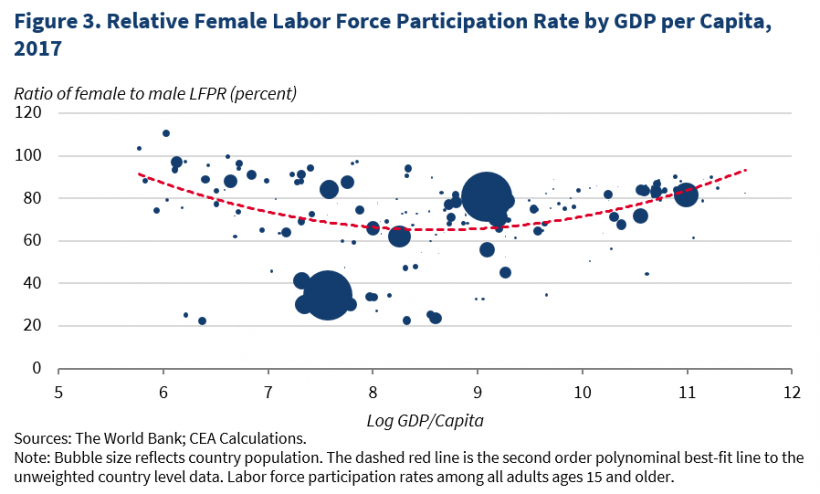 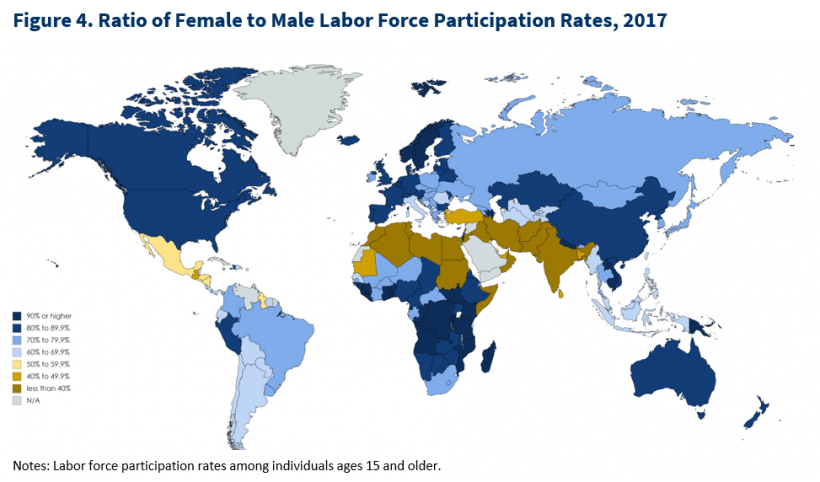 A third way to think about how increased female labor force participation rates can contribute to economic growth is to ask how much GDP would increase if women worked at the same rate as men, and earned the same wages. To do so, we can hold male wages and employment rates constant and observe how an increase in gender parity would affect GDP.

McKinsey observes that if women contributed to GDP at the same pace as men it could add $28 trillion to global GDP by 2025; however, McKinsey acknowledges that complete gender parity within a decade is unlikely. For a more realistic estimate, McKinsey assesses that if female labor force participation rates in each country increased at the same pace as the most rapidly improving country in their region, global GDP could increase by $12 trillion over the course of 10 years. This is equivalent to adding 1 percentage point per year to global GDP growth (11 p.p. over the course of the decade). Similarly, the International Labour Organization estimates that reducing the gender gap by 25 percent would increase global GDP by $5.8 trillion by 2025, with much of this growth coming attributed to emerging economies where the gap is the widest. In part these growth rates reflect a shift from home production activities, which are excluded from GDP, to labor market activities, which are included in GDP. Nevertheless, the results of these studies highlight the potential for additional growth as a result of moving toward gender parity in employment through increased participation of women in the labor force.

The analysis above indicates that there is much room to bring additional women into the labor force and to grow the economy as a result. By considering absolute labor force participation rates, countries’ economic development paths, the opportunities available to women, as well as social norms, laws, and policies, we can better understand paths forward to increase the female presence in the labor force, thereby boosting global economic growth.