The Council of Economic Advisers (CEA) estimates that this pro-growth approach to Federal regulation will raise real incomes by upwards of $3,100 per household per year. In fact, 20 of these actions alone are expected to save American consumers and businesses over $220 billion per year. Moreover, the CEA estimates that, by 2026, Safer Affordable Fuel Efficient (SAFE) Vehicles will reduce the quality-adjusted price of a new vehicle by $2,200.

This deregulatory action will increase the real incomes of Americans by $53 billion per year over the period of 2021-2029.

These deregulatory efforts add up to real savings for American families and businesses. Recent work by Casey Mulligan, former Chief Economist at the CEA, proves as much. According to his analysis, overturning the President’s deregulatory rules, reviving the regulatory state, and imposing a ban on fracking would severely damage the financial health of Americans at the bottom 20 percent of the income distribution.

For example, the revolution in the shale industry reduced the global price of oil by 10 percent, saving the poorest quintile of Americans almost 7 percent of household income alone. Furthermore, significant cost savings from the deregulation of prescription drugs and internet access helped the poorest fifth of households eight times more than the richest fifth. Mulligan finds the net effect of these deregulatory actions, once fully realized, will represent nearly 15 percent savings for the bottom quintile of households, as illustrated in Figure 1. 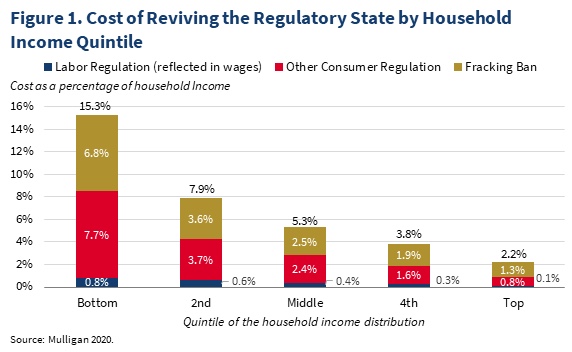 Cutting red tape has overwhelmingly benefited Americans previously left behind. As the economic comeback continues, President Trump’s commitment to reducing needless anti-growth measures will assure Americans, particularly the most vulnerable, that the economy is working for them.

Prior to the global pandemic, regulatory reforms contributed to a historically strong labor market and economy, lifting more than 2 million Americans out of poverty and liberating 7 million Americans from food stamps. This is the direct result of President Trump’s actions, and his plan for further deregulatory overhaul will ensure that America’s workers and families prosper.