Today, the Census Bureau released its official measures of the economic well-being of Americans in 2018. While Americans across the board generally saw improvements, the data show that in many cases those who had been forgotten in the past were lifted up the most.

Real median household income increased to more than $63,000 in 2018, the highest level in nearly two decades. A growing economy that produces more jobs and higher earnings has driven the improvement in economic well-being. There were 2.3 million more full-time, year-round workers in 2018 than in 2017, of which 1.6 million were women. 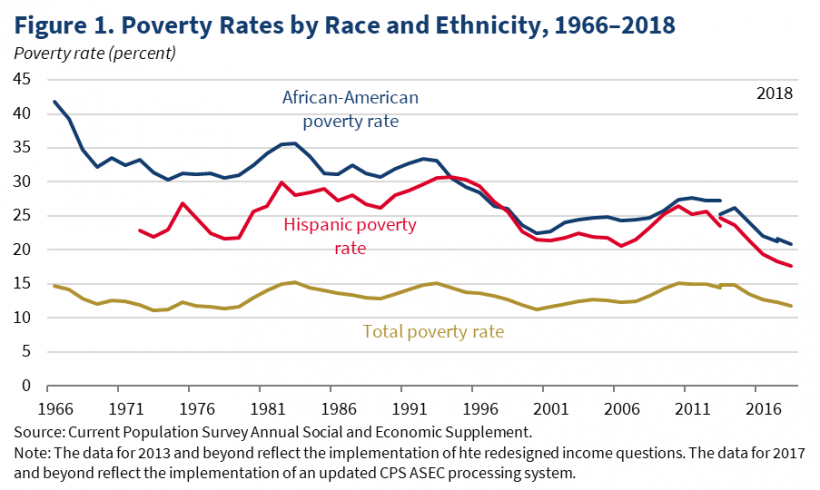 As incomes rose, inequality fell. The share of income held by the top 20 percent fell by the largest amount in over a decade, as did the Gini index (an overall measure of inequality in the population). In fact, households between the 20th and 40th percentile of the distribution experienced the largest increase in average household income among all quintiles in 2018, with a gain of 2.5 percent.

Before today’s release of the latest Census data, it was already clear that the growing economy was adding millions of jobs and pushing up wages for American workers. We now have evidence that the gains were particularly important in 2018 for those typically left behind: Income increased the most for lower-income families. Inequality fell. Poverty fell, especially for black and Hispanic families, and for children in general.

Trump Administration policies, such as tax reform and deregulation, have unleashed the private sector. As a result, unemployment has reached record lows, millions of jobs have been added, and wages have risen. It can no longer be denied that some of the biggest beneficiaries are Americans who have been disadvantaged historically.