Heroes of Western Civilization: 76 Years After the Warsaw Uprising

A little over three years ago, President Trump delivered one of the most important speeches of his presidency at Krasinski Square in Warsaw, Poland. Standing before a monument to the Warsaw Uprising, he called for defending Western civilization against all enemies who seek to destroy it.

In that speech, President Trump honored the heroes of the Warsaw Uprising, who rose up and took arms against their Nazi oppressors 76 years ago on August 1, 1944. In vivid detail, the President recounted the story of the defenders of Jerusalem Avenue and their struggle to hold that vital strip of land in defense of Polish freedom.

The heroes of the Warsaw Uprising remind us, President Trump said, “that the West was saved with the blood of patriots; that each generation must rise up and play their part in its defense; and that every foot of ground, and every last inch of civilization is worth defending with your life.”

The President also paid homage to Pope John Paul II, a lifelong champion for religious freedom. The Pope’s nine-day pilgrimage to Poland in June 1979 changed the course of history and helped set in motion a chain of events that led to the downfall of Communism in Europe.

“And when the day came on June 2nd, 1979, and one million Poles gathered around Victory Square for their very first mass with their Polish Pope—that day, every Communist in Warsaw must have known that their oppressive system would soon come crashing down,” President Trump said. 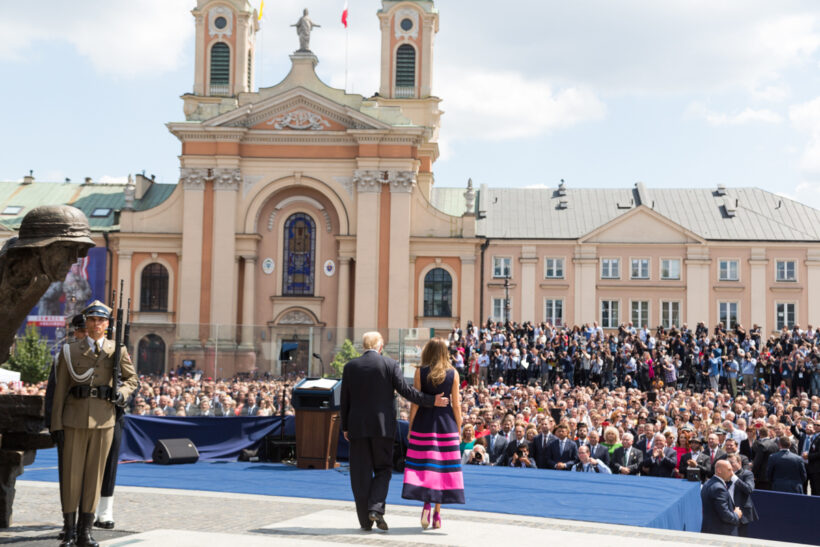 President Trump and the First Lady in Warsaw, Poland | July 6, 2017

Inspired by Pope John Paul II’s message of hope and courage in the face of oppression, the Polish people united in spiritual determination. The President noted that millions gathered to hear the Pope’s sermon, where they joined in a single prayer of three simple words.

This year, on the 41st anniversary of Pope John Paul II’s historic pilgrimage, President Trump and First Lady Melania Trump traveled to the John Paul II Shrine in Washington, D.C. The President once again honored the Polish Pope’s contribution to ending oppression and reaffirmed America’s commitment to liberty for all people. 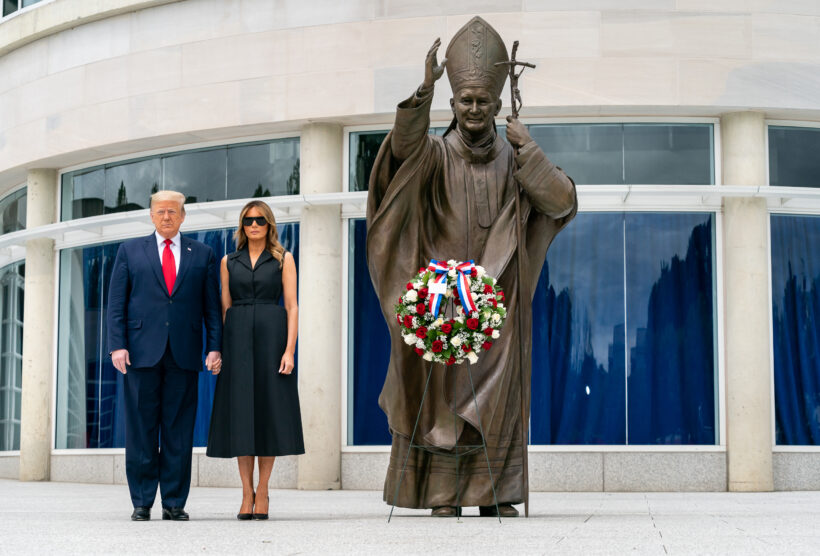 Pope John Paul II was a beacon of hope and strength to peoples oppressed by a brutal Communist regime. The Pope’s heroic defense of freedom, as well as the valor of the Polish patriots of the Warsaw Uprising, remains an example to freedom-loving people the world over.

Honoring their legacy, President Trump continues to fight for religious liberty both in the United States and across the world. He unwaveringly defends both the sanctity of life and human dignity. On the same day as his visit to Pope John Paul II’s shrine in June, the President signed an executive order committing the United States to advancing religious freedom worldwide—calling it “America’s first freedom” as well as “a moral and national security imperative.”

President Trump understands that religious liberties are not a creation of the state. They are “a gift of God to every person and a right that is fundamental to the flourishing of our society.”