The Full Cost of the Opioid Crisis: $2.5 Trillion Over Four Years

October 26 marked National Prescription Drug Take Back Day, which provided Americans an opportunity to prevent drug misuse and theft by ridding their homes of potentially dangerous expired, unused, and unwanted prescription drugs. One of the most tangible examples of the dangers of misusing prescription drugs comes from the opioid crisis, which the Council of Economic Advisers (CEA) estimates cost $696 billion in 2018—or 3.4 percent of GDP—and more than $2.5 trillion for the four-year period from 2015 to 2018. These massive costs point to the nationwide economic destruction from America’s very human “crisis next door.”

In 2017, CEA published a report that measured the full cost of the opioid crisis by considering the value of lost lives, as well as increases in healthcare and substance abuse treatment costs, increases in criminal justice costs, and reductions in productivity. The updated estimates for 2018 were calculated using a similar methodology as the 2017 report.

CEA’s cost estimates are more than three times higher than the findings from a recent Society of Actuaries study, because CEA accounts for the value of a statistical life (VSL). VSLs are commonly used by regulators for benefit-cost analyses and regulatory impact analyses. CEA prefers this comprehensive measure because the opioid crisis not only increases costs and lowers productivity throughout the economy, it also prematurely ends lives, which have value beyond their effect on economic output. (For more information on calculating VSL, see Section 2 of CEA’s 2017 report.)

Overdose deaths involving opioids are coming down during the Trump Administration, reversing the upward trend that has persisted since at least 1999. As displayed in Figure 1, monthly opioid-involved overdose deaths stopped their steep upward nationwide growth starting in January 2017. 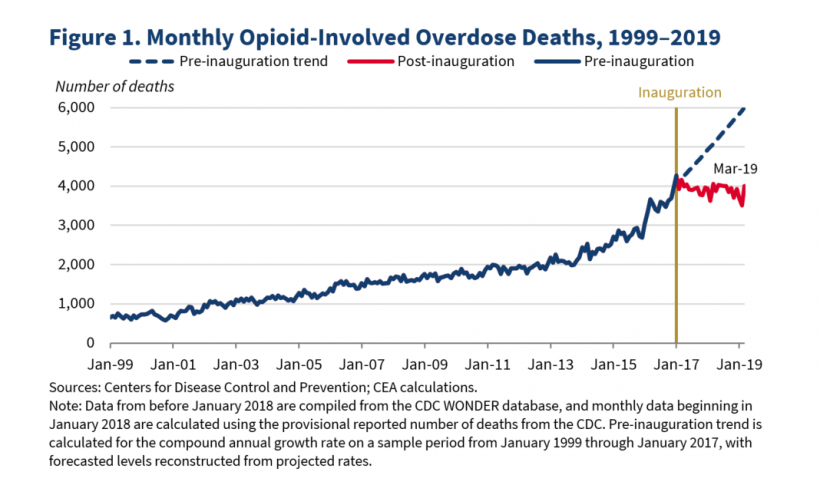 Compared to the previous trend for monthly opioid-related overdose deaths, CEA estimates that almost 30,000 lives were saved from January 2017 through March 2019 (the latest available provisional data). Had this trend continued its upward trajectory, CEA estimates that the cost of the opioid crisis would have been $326 billion higher between January 2017 and March 2019.

Just as the start and growth of the opioid crisis had many causes, ending the crisis requires many solutions. Increased funding for treatment, enhanced education about the dangers of opioids, and improved security to stop the flow of illicit drugs are all necessary tools to fight the crisis. Thankfully, last year Congress passed and President Trump signed the SUPPORT Act, which is the largest legislative package addressing a single drug crisis in U.S. history.

In fiscal years 2018 and 2019, $6 billion in new funding was secured to fight opioid abuse, including to expand access to medication-assisted treatment. According to estimates from the Department of Health and Human Services (HHS), from 2016 to 2019, the number of Americans receiving medication-assisted treatment rose 38 percent, from approximately 921,000 to 1.27 million.

Aided by better education for healthcare providers and patients, there has been a nearly one-third decline in the total amount of opioids prescribed since President Trump took office through June 2019, according to HHS estimates. Importantly, nearly 60 percent fewer young adults between the ages of 18 and 25 began using heroin in 2018 than in 2016.

Another necessary component to solving the opioid crisis is securing the border to limit deadly drugs from flowing into the United States. U.S. Customs and Border Protection (CBP) nationwide seizures of fentanyl are up 265 percent over the last three fiscal years. And CBP seized enough fentanyl in fiscal year 2019 to support 10,000 fentanyl users for more than 200 years, based on typical usage. In a promising sign that these coordinated efforts are working, as of March 2019, preliminary data show year-over-year drug overdose deaths in Pennsylvania and Ohio—two of the states hit hardest by the crisis—were down from their peak levels by more than 23 percent.

Even with the decrease in opioid-related deaths under President Trump, the $696 billion cost in 2018 shows that this crisis is far from over. To help the public and policymakers understand the economic causes and costs of the opioid crisis, CEA will continue publishing reports on this critically important policy priority.

(For further reading about the economic causes of the opioid crisis, see CEA’s 2019 report The Role of Opioid Prices in the Evolving Opioid Crisis.)