February Jobs Report Shows Wage Growth is the Fastest Since 2009

According to the February Employment Situation Report from the Bureau of Labor Statistics, nominal average hourly earnings rose by 3.4 percent over the past 12 months—the fastest nominal hourly wage growth since 2009, and the 7th straight month that year-over-year wage gains were at or above 3 percent. Prior to 2018, nominal average hourly wage gains had not reached 3 percent since April 2009. 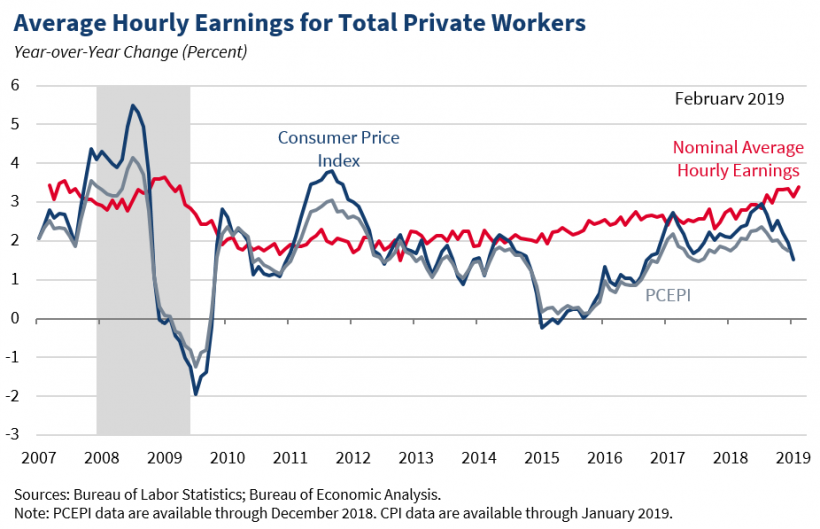 Although the economy only added 20,000 jobs in February, falling short of market expectations, the average jobs growth in the past 12 months was a healthy 209,000 jobs and in the past 6 months averaged 190,000 jobs gained. Both the 12-month and 6-month averages remain above the 2017 annual average of 179,000 jobs per month. Both January and December’s employment numbers were also revised up by a combined 12,000 jobs (5,000 in December, and 7,000 in January). The economy has now added over 5.3 million jobs since the election, which includes 493,000 jobs in the Manufacturing industry alone.

In addition to the unemployment rate, two key measures of labor market strength are the labor force participation rate, which tracks how many people are working or looking for work, and the employment-to-population ratio, which tracks the share of people who are working. The labor force participation rate matched its highest rate in over 5 years (since August 2013), remaining unchanged at 63.2 percent in February. The employment to population ratio also is the highest it has been since December 2008, remaining unchanged at 60.7.

Even though the payroll employment growth fell short of expectations, one month does not make a trend. Furthermore, the totality of this month’s jobs report—including the accelerating wage growth, falling unemployment rate, and continuation of the longest consecutive streak of jobs gains—reflects the continued growth and strength of the United States labor market.