The current economic expansion, which began roughly a decade ago, became the longest in U.S. history on July 1, 2019, beating the previous record that lasted from March 1991 through March 2001. As today’s advance Gross Domestic Product (GDP) release confirms, economic growth continued in the third quarter of 2019, beating market expectations and adding to the expansion’s record length. The release also confirms that the Trump Administration’s policies support sustained economic growth and lead to higher incomes for American families. 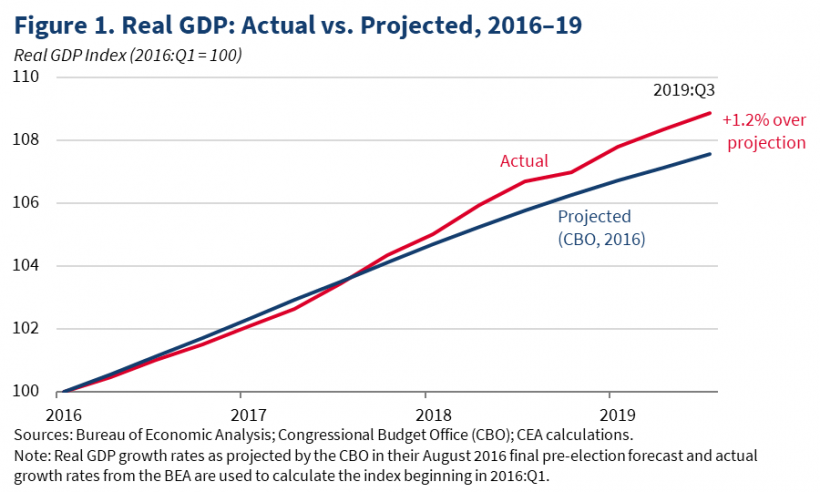 Additionally, advanced estimates would have likely been higher if not for the recently-ended strike at General Motors and continued production problems at Boeing. CEA estimates that these two events together held down the third quarter annual growth rate by 0.3 percentage point, meaning that the third quarter rate would have been 2.2 percent without these events.

Most importantly, today’s GDP release demonstrates that America’s workers benefit the most from continued economic expansion. American consumers continue to drive the economy with robust growth in spending and income. Real consumer spending grew 2.9 percent at an annual rate in the third quarter, up from a 2.6 percent pace during the preceding four quarters. Real disposable personal income—a measure of income that is measured after accounting for taxes—also increased at a 2.9 percent annual rate in the third quarter.

To stay competitive in periods of sustained economic growth, businesses need to increase employee pay or find individuals currently outside the labor market. As a positive sign that workers are coming off the sidelines to fill America’s 7.1 million open jobs, in the third quarter, 73.7 percent of workers entering employment came from out of the labor force rather than from unemployment, the highest share since the series began in 1990.

Given the record length of the economic expansion, positive GDP growth points to the economy remaining strong in future quarters. With a 50-year low in the unemployment rate, further economic expansion will continue increasing wages and allowing more Americans to share in the benefits of a growing economy.