Since President Trump’s election, the Dow Jones Industrial Average (DJIA) has hit 127 record closings—more than any other president’s first three years since 1952. But wealth gains under the Trump Administration extend far beyond the stock market, and—in contrast to past periods of economic expansion—recent growth is not only concentrated among the wealthiest Americans.

Real total household and nonprofit net wealth increased 12.1 percent—over $12 trillion—over the first 11 quarters of the Trump Administration. This is more than any other president’s first 11 quarters since this data series began. Since President Trump’s election, the working class has seen the largest growth: Net worth held by the bottom 50 percent of households has increased by 47 percent, more than three times the rate of increase for the top 1 percent of households.

These recent gains are a sharp departure from the past. Under the Trump Administration, net worth for the bottom 50 percent of households has increased at an annual rate 15 times higher than the average growth seen under the three prior administrations’ expansion periods, as shown in the figure on the left below. 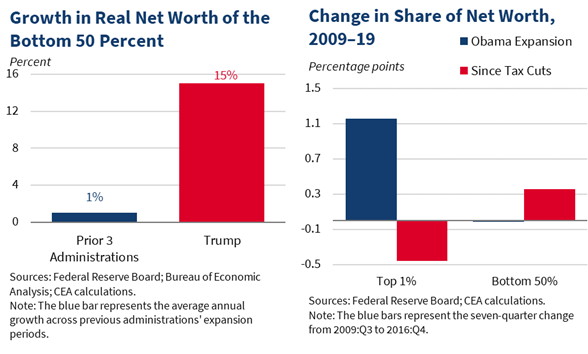 Beyond wealth, income measures also show lower-income Americans realizing the strongest gains. Under President Trump, real take home pay for the typical middle class family has increased by roughly $5,000. And, at more than $66,000, real median household income is now at the highest level ever recorded.

December’s jobs report shows that average hourly earnings growth for production and non-supervisory workers have been above 3.0 percent for 17 consecutive months. In a strong economy, employers compete for talent by raising wages and bringing new workers into the labor force. After shrinking by 1.6 million under the previous administration’s expansion period, since the 2016 election the prime-age labor force has expanded by 2.3 million people. This growth is propelled by Americans coming off of the sidelines: In the fourth quarter of 2019, 74.2 percent of workers entering employment came from outside of the labor force rather than from unemployment, which is the highest share since the series began in 1990.

Consistent, strong overall wage growth obscures how these gains reduce income inequality. In other words, wages are growing faster for nearly all groups, but historically disadvantaged groups are seeing the fastest growth. As shown in the figure below, since President Trump took office:

These results are the opposite of those observed over the previous administration’s expansion period, where historically advantaged groups saw higher wage gains. 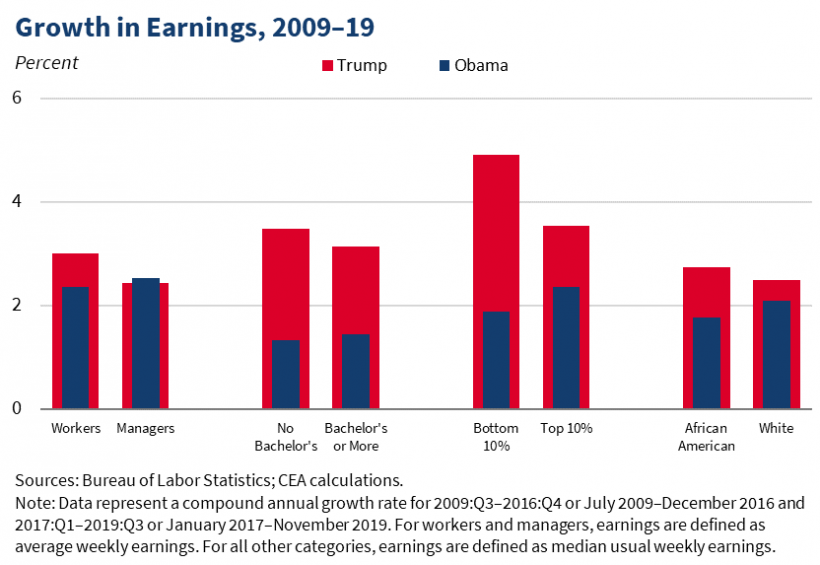 When measured as the share of income earned by the top 20 percent, income inequality fell in 2018 by the largest amount in over a decade. The Gini coefficient, an overall measure of inequality, also fell in 2018.

Evaluating data on bonuses also shows how the labor market benefits blue-collar workers. Over the past two years, workers in construction and manufacturing saw bonus growth of 18 percent and 23 percent, respectively. Workers in the lower-wage leisure and hospitality industry saw their bonuses jump by 83 percent. Alternatively, bonuses fell in the traditionally higher-wage financial activities (-28 percent) and professional and business services (-43 percent) industries.

Higher incomes and a historically tight labor market translate into fewer Americans living below the poverty line. Nearly 2.5 million people were lifted out of poverty in 2017 and 2018, and the poverty rates for African Americans and Hispanics both fell in 2018, reaching new historic lows. Beyond poverty reduction, the strong labor market allows Americans to move from welfare to work. Since the 2016 election, SNAP enrollment is down by nearly 7 million and Medicaid/CHIP enrollment is down by nearly 3 million. Enrollment in TANF and non-elderly SSI also fell over that time.

Contrary to the narrative that the Trump economy only benefits the top, these facts confirm the United States’ unprecedented blue-collar boom. Increased wealth for the bottom half of American households, faster wage growth for historically disadvantaged Americans, and falling welfare enrollment as incomes rise and people come off the labor market’s sidelines—these are the results of President Trump’s pro-growth, pro-worker policies.