As discussed in the 2019 Economic Report of the President, the Council of Economic Advisers demonstrated that the strong economic performance in 2017 and 2018 was not merely a continuation of trends already under way during the preceding post-recession expansion, but rather constituted a distinct break from trend and positive surprise relative to expectations. We see in today’s advance estimate of real GDP growth in the first quarter of 2019 that the economy continues to outperform expectations. 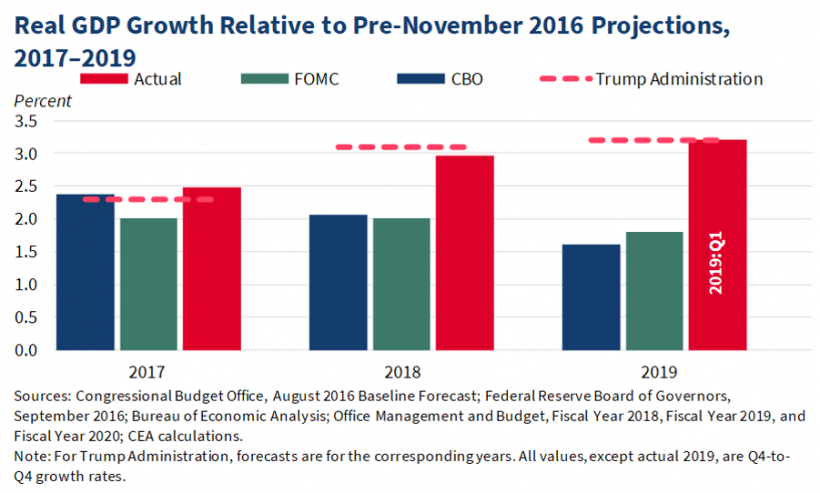 Moreover, we consider the 2019:Q1 advance estimate likely underestimates the current pace of economic growth in the United States for two reasons.  First, as shown in the following table, in recent years estimates of real GDP growth in the first quarter of a calendar year have on average been below growth during the subsequent three quarters.  Indeed, over the past 25 years, the Q1 estimate has, on average, been 0.9 percentage point lower than the average of Q2, Q3, and Q4 estimates. This suggests there may be some lingering seasonality in the official estimates of first-quarter real GDP growth.

Second, the Bureau of Economic Analysis (BEA) now estimates that the partial government shutdown in 2019:Q1 lowered the overall growth rate of real GDP by 0.3 percentage point at an annual rate. In their technical note, the BEA states that “the full effects of the partial federal government shutdown on the first quarter estimates cannot be quantified because they are embedded in the regular source data that underlie the estimates and cannot be separately identified.” In the absence of residual seasonality and the government shutdown, real GDP growth in the first quarter of this year might have been up to 1.2 percentage points higher, implying an annualized growth rates of 4.4 percent.