The Bureau of Labor Statistics (BLS) released its final monthly Employment Situation Report of 2018, marking a great year for American workers and the economy as a whole. Total nonfarm payroll employment rose by 312,000 jobs in December (see figure), far exceeding market expectations (180,000) as well as besting the average monthly additions from 2017 (182,000) and 2016 (195,000).

Continuing the historic streak of positive jobs gains, 2018 experienced more job creation than the previous two years, with 2.6 million new jobs over the course of the year compared with 2.2 million in 2017 and 2.3 million in 2016. Furthermore, this growth was consistently strong throughout the year; the economy has added over 100,000 jobs every month in 2018, just the second time since 2000 that this has occurred for a full calendar year. Since President Trump was elected in November 2016, the U.S. economy has created 5 million jobs. 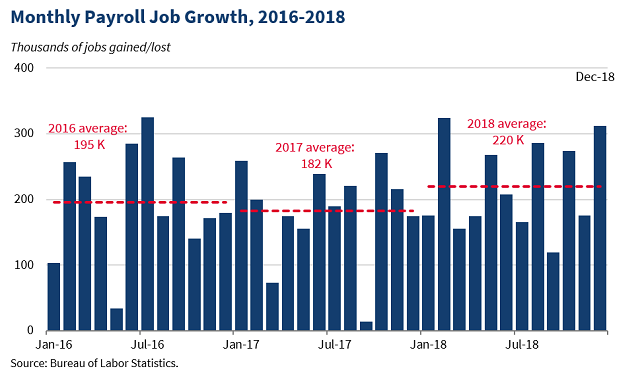 There were job gains across many industries in December, including significant gains in education and health services (82,000), leisure and hospitality (55,000), and in manufacturing (32,000). Manufacturing has been a bright spot since President Trump’s election, and now averages 20,000 new jobs per month compared to 8,000 per month in the four years prior. The 284,000 manufacturing jobs created in 2018 was the most the industry has added in a calendar year since 1997. The widespread employment gains across industries also occurred for 2018 as a whole. The professional and business services (583,000) and education and health services (517,000) industries produced over half-a-million jobs each. Employment in the leisure and hospitality industry increased by 306,000 jobs. Construction employment rose by 280,000 jobs.

The continued low unemployment rate and the consistent employment gains of more than 100,000 jobs every month in 2018 demonstrate the effectiveness of the Administration’s economic policies. As workers continue to come off the sidelines, there also remain opportunities for sustained employment growth as we enter the new year.