Artificial Intelligence for the American People

The age of artificial intelligence (AI) has arrived, and is transforming everything from healthcare to transportation to manufacturing.

America has long been the global leader in this new era of AI, and is poised to maintain this leadership going forward because of our strong innovation ecosystem. Realizing the full potential of AI for the Nation requires the combined efforts of industry, academia, and government. The Administration has been active in developing policies and implementing strategies that accelerate AI innovation in the U.S. for the benefit of the American people. These activities align with several areas of emphasis: AI for American Innovation, AI for American Industry, AI for the American Worker, and AI with American Values. This AI.gov website provides a portal for exploring these activities in more depth, and serves as a resource for those who want to learn more about how to take full advantage of the opportunities of AI.

“Continued American leadership in Artificial Intelligence is of paramount importance to maintaining the economic and national security of the United States.”
– President Donald J. Trump

04 AI for the American Worker 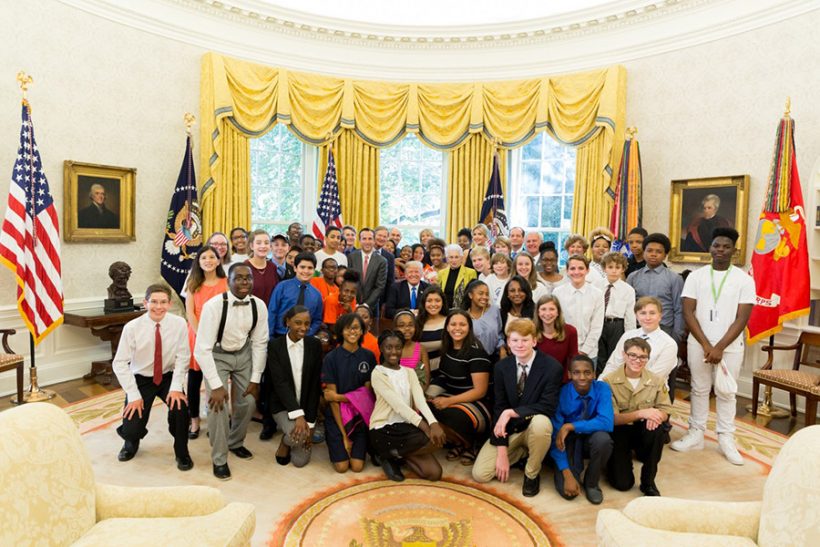 The American worker is a vital national asset, and advances in technology are changing the American workforce. Artificial intelligence is allowing American companies to focus resources on higher value work while enabling American workers to accomplish tasks more safely, effectively, and efficiently. The Nation also needs highly-skilled workers in industry and academia who can contribute to the R&D advances that create the AI of the future. The American AI Initiative calls for agencies to prioritize fellowship and training programs to help American workers gain AI-relevant skills through apprenticeships, skills programs, fellowships, and education in computer science and other growing Science, Technology, Engineering, and Math (STEM) fields. The Initiative also leverages the extensive set of actions already underway to provide education and training opportunities for America’s workers.

Through an executive order establishing the National Council for the American Worker, President Trump has charged companies and trade groups across the country to sign a pledge committing to expand education, training, and reskilling opportunities for American workers — as of February 2019 over 200 companies have pledged to create over six and a half million such opportunities. The Trump administration has also led several initiatives recognizing apprenticeships, STEM education, and lifelong learning as essential to America’s future workforce strategy. Created by executive order, the Task Force on Apprenticeship Expansion brought private industry and government together to identify opportunities that would expand industry-recognized apprenticeships—the Task Force made 26 recommendations to the President for consideration. Additionally, through Presidential Memorandum to the Secretary of Education, President Trump has identified STEM education as an Administration priority, establishing a goal of no less than $200 million in grant funding per year to the promotion of high-quality Computer Science and STEM education.

To ensure the Nation also has highly-skilled experts who can advance the AI technologies of the future, the Select Committee on AI has prioritized funding to train the next generation of American AI researchers.  The Federal R&D agencies have a number of fellowships to support graduate and postdoctoral studies in AI.

As automation and AI become more prevalent, allowing Americans to work more efficiently and safely, the American workforce and industry must embrace lifelong learning as the way of the future. The Trump administration is committed to smart workforce initiatives that protect the American worker as a vital national asset while promoting the emerging technologies of tomorrow.

National Council for the American Worker

As advances in technology, automation, and AI change the national economy, so too must the country’s education and job training programs change to prepare Americans for the new economy and the emerging industries of the future. President Trump’s July 2018 executive order established the President’s National Council for the American Worker. This Council recognizes skilled American workers as our country’s most valuable resource and works to raise awareness of urgent workforce issues and develop a national strategy for empowering American workers with affordable education and skills-based training for the jobs of today and of the future.

On March 6, 2019, Commerce Secretary Wilbur Ross and President Trump’s Advisor Ivanka Trump officially launched the creation of the American Workforce Policy Advisory Board. This board will work together with the National Council for the American Worker to create a national strategy ensuring that all Americans have the skills and opportunity to secure good paying jobs and successfully navigate technological disruptions and the rapidly changing nature of work.

The National Council for the American Worker Executive Order

On June 15, 2017, President Trump signed an executive order, Expanding Apprenticeships in America, which established the Task Force on Apprenticeship Expansion. This task force, led by Secretary of Labor Alexander Acosta, worked throughout the year “to identify strategies and proposals to promote apprenticeships, especially in sectors where apprenticeship programs are insufficient.” Through four subcommittees ranging from education and credentialing to regulatory strategies, the Task Force presented its final report to President Trump on May 10, 2018 with 26 recommendations to promote apprenticeships for American workers.

In December 2018, the National Science and Technology Council’s Committee on STEM Education (CoSTEM) released the Federal 5-Year STEM Education Strategic Plan, which outlines the goals for American STEM education. These goals include building a strong foundation of STEM literacy, increasing diversity in STEM careers, and preparing the STEM workforce of the future. In September 2017, President Trump signed a Presidential Memorandum for the Secretary of Education, which emphasizes STEM education as a key Administration priority, establishing a goal of devoting at least $200 million in grant funds per year to the promotion of high-quality Computer Science and STEM education. Addressing both shortages in STEM teachers at all levels and expanding access to Computer Science and STEM education, the NSTC CoSTEM is the Administration’s vehicle to execute policy on this central element of American leadership in AI.

With the Executive Order on AI, President Trump emphasized the importance of training the next generation of AI researchers.  Federal departments and agencies that invest in AI R&D have defined AI as a priority area within Federal fellowship, training, and service programs.  Opportunities are provided at all levels of advanced training, including for undergraduate and graduate students, postdoctoral researchers, and early career academic AI researchers.

The National Science Foundation leads the way on Advanced Technological Education (ATE), publishing a program solicitation to award grants totaling $66 million during FY19. The ATE program partners with academic institutions and industry to improve the education of technicians vital to our nation’s economy. Additionally, NSF’s “Big Idea” on “Future of Work at the Human-Technology Frontier” is informing AI-related elements of NSF’s long-term research agenda.