Our 115th Justice of the Supreme Court

Following a vote by the Senate to confirm on October 26, Justice Barrett was officially sworn in on October 27, 2020.

President Donald J. Trump nominated Judge Amy Coney Barrett to fill the seat of the late Justice Ruth Bader Ginsburg on the United States Supreme Court. After a unanimous vote by the Judiciary Committee on October 22, 2020, the Senate confirmed Barrett on October 26.

“Justice Barrett, as you take your oath tonight, the legacy of our ancestors falls to you,” President Trump said. “The American people put their trust in you and their faith in you as you take up the task of defending our laws, our Constitution, and this country that we all love. We ask God to give you wisdom and courage.”

A graduate of Rhodes College and Notre Dame Law School, Justice Barrett clerked for the late Justice Antonin Scalia before pursuing a career as a litigator and a professor. She was confirmed as a Federal judge for the Seventh Circuit Court of Appeals after a bipartisan vote of the Senate.

In that capacity, Justice Barrett worked faithfully to uphold our nation’s Constitution as written. She is also a dedicated mother of seven who brings a new and important perspective to the Supreme Court, such as:

Chief Justice John Roberts recognized Justice Barrett’s exceptional qualifications in 2010 when he appointed her to the Advisory Committee on Federal Rules of Appellate Procedure, a position she held for six years.

Justice Barrett has made her judicial philosophy clear: She will not legislate from the bench.

The oath that I have solemnly taken tonight means, at its core, that I will do my job without any fear or favor, and that I will do so independently of both the political branches and of my own preferences 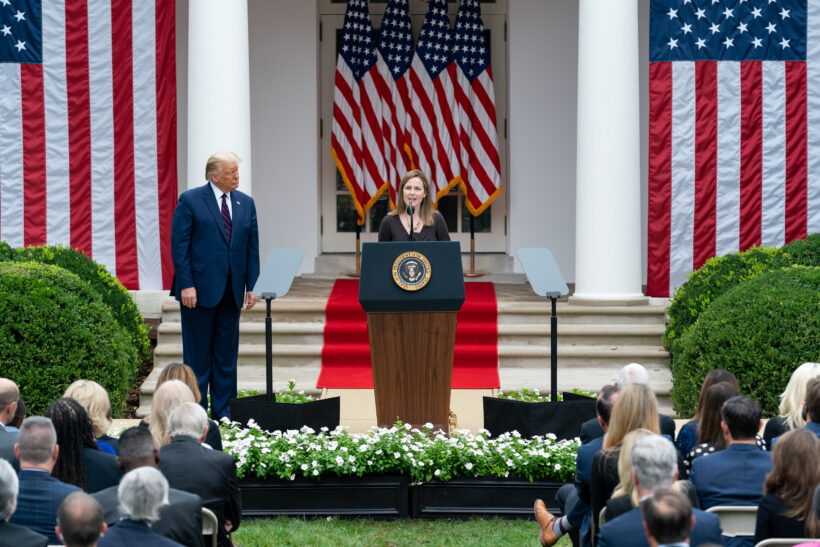 Judge Barrett’s numerous honors and awards throughout her legal career

At Notre Dame Law School, Judge Barrett was recognized as the “Distinguished Professor of the Year” by three different graduating classes.

Letter of support from State Legislative Leaders in all 50 states

Thanks! We’ll keep you posted.