A Look at the Underlying Causes of the Opioid Crisis

When President Trump was elected, the opioid crisis was devastating communities across our country. In the year before he took office – between December 2015 and December 2016 – monthly opioid overdose deaths increased by 48 percent. For the first time in at least 17 years, however, the official data for 2017 and the provisional data for 2018 show a different trend. While deaths remain at epidemic levels, the unrelenting rise in opioid deaths has stopped and may be beginning to reverse under the Trump Administration (figure 1). 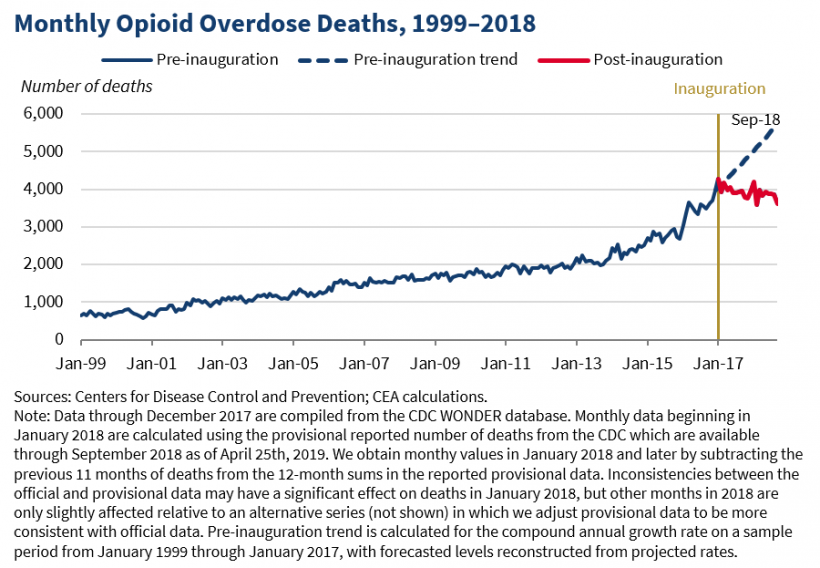 It is important to recognize, however, that progress in reducing the death toll from the opioid epidemic will take time. The sustained escalation of the opioid epidemic over multiple decades has resulted in a large pool of Americans suffering from substance use disorders. Fortunately, Trump Administration actions to expand treatment, reduce new demand for opioids, and curtail the supply of drugs may be paying off as opioid-involved overdose deaths begin to level off.

In order to guide policies that address the root causes of the epidemic, last week, the Council of Economic Advisers released a report, “The Role of Prices in the Evolving Opioid Crisis,” that provides new insights into some of the factors that drove the epidemic. In that report, CEA estimates that out-of-pocket prices for prescription opioids fell by 81 percent between 2001 and 2010. This price reduction resulted largely from expanded government health coverage, with the share of prescription opioids funded by public payers increasing from 17 to 60 percent over this time period.

CEA also examines the second wave of the opioid epidemic since 2010 when growth in illicit opioid abuse replaced prescription opioid abuse. The infiltration of highly potent but cheap fentanyl into the drug supply was especially important, causing the potency-adjusted price of illicit opioids to plummet. Unfortunately, insufficient action was taken to counteract the increasing supply of illicit fentanyl, and overdose deaths accelerated through the end of 2016.

The Trump Administration has taken swift and serious action to address the root causes of the opioid crisis. Opioid-involved deaths have finally leveled off. Sustained action over the long haul can help bring America out of this deadly epidemic.